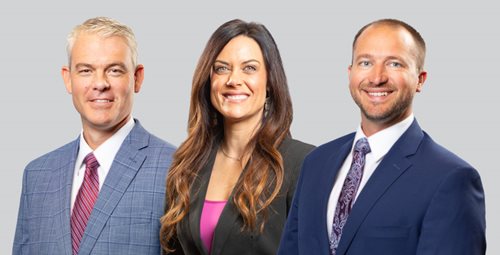 The Bank of Missouri (TBOM) is pleased to announce the addition of three new members to its Central Region Advisory Board. Jon Ihler, Gina Rende and Nathan Jones bring the board to a total of ten members.

“Our advisory board members are vital to the success of The Bank of Missouri,” said Jay Alexander, TBOM’s Community Bank President in Columbia. “This group of community leaders are advocates for our organization and help find innovative ways to best serve our communities. They each hold unique perspectives that we value.”

Jon Ihler is the President and CEO of MFA Oil Company. MFA Oil Company, formed in 1929, is a farmer-owned cooperative with more than 40,000 members. MFA Oil is the seventh largest propane retailer in the United States. The company supplies fuels, lubricants and propane to customers in Missouri, Arkansas, Indiana, Iowa, Kansas, Kentucky, Oklahoma and Tennessee. Through a subsidiary, MFA Oil operates Break Time convenience stores in Missouri and Arkansas and Big O Tires franchises in Missouri, Arkansas and Oklahoma. Ihler holds a degree in agricultural economics from the University of Missouri. He is a Columbia native and a long-time Missouri resident.

Gina Rende is a Commercial Real Estate Broker with Maly Commercial Real Estate in Columbia. Maly Real Estate is widely considered the top commercial broker in Central Missouri and has completed over 200 commercial and retail site selections for major national tenants across 32 states. Rende has been with the firm for 10-years and began her real estate career as a settlement agent for a national title insurance agency specializing in commercial and residential transactions. She has vast experience and expertise in lease and contract negotiation, site location, demographic analysis, and creative marketing. Her involvement in the community—including the Columbia Chamber of Commerce, Women’s Network, Thrive, and support of numerous charitable organizations—is a reflection of her commitment to the success of her clients and the Columbia community as a whole. Rende received a dual bachelor’s degree in Journalism and Communications from the University of Missouri.

Nathan Jones has practiced law in Columbia for over a decade and is a partner with the law firm of Jones & Ueligger, where he specializes in estate and business law. He assists individuals and families with estate planning, probate, and trust administration. Jones also works with entrepreneurs and business owners to help them create and run efficient, risk-protected businesses. He sits on the board of directors for the Community Foundation of Central Missouri, City of Refuge, and was named one of Columbia’s 20 under 40 in 2017. He is also past President of the Mid-Missouri Estate Planning Council. Jones received his undergraduate degree in finance from the University of Missouri and his law degree from the University of Missouri School of Law where he graduated top in his class. He is also a member of The Crossing Church.

“We’re grateful to Jon, Gina, Nathan, and all of our advisory members for the time and expertise they generously share with us,” said Mike Ireland, TBOM’s Columbia-based Regional President.

“One relationship at a time” is a phrase heard often at The Bank of Missouri. That’s because the Bank was founded on the principles of relationship-building 130 years ago. Through relationships, we empower our community with the resources they need to thrive.

Leaving The Bank of Missouri

External third-party websites will be presented in a new and separate content window. The Bank of Missouri does not provide, and is not responsible for, the product, service, overall website content, availability, accessibility, security, or privacy policies on any external third-party sites. We encourage you to review their privacy and security policies which may differ from The Bank of Missouri. The inclusion of any hyperlink does not imply any endorsement, investigation, verification or monitoring by The Bank of Missouri of any information in any hyperlinked site.