A story of local history reclaimed 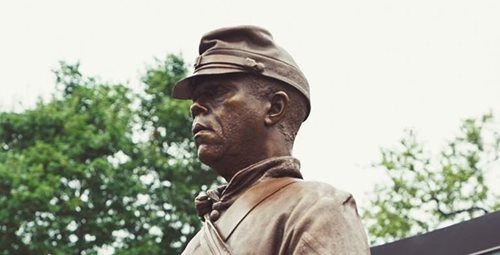 This is the story of how opening a wrong drawer led to reclaiming a lost piece of local history. Had the content in the drawer been less compelling, or the opener of the drawer been less curious, we wouldn’t be where we are. But as it turns out, Denise Lincoln is the one who opened that drawer.

While researching her own family’s history at the National Archives and Records Administration, what she found on accident were the records of local African Americans who enlisted in the U.S. Colored Troops during the Civil War. Through more research, she uncovered there were about 200 African Americans who enlisted at the courthouse in Cape Girardeau. She also learned that their story was largely untold.

Denise was able to uncover quite a bit of information about one of those soldiers, James Ivers. James was a slave laborer owned by John Ivers, Jr., a partner in a produce and grocery merchant located along the Mississippi River (in the current Port Cape building, for those familiar with the area).

As James hauled sacks of grain and flour, the Union Army’s Fort A would have been in his line of sight. When Cape Girardeau was occupied by the Union Army, large numbers of runaway slaves and refugees came to the city in pursuit of freedom. James and his wife, Harriet, would have seen freedom on the horizon in their daily lives.

On June 18, 1863, African American men were allowed to enlist as soldiers in the Union Army, for a limited time. James was there on the first day, walking two blocks up from the river to the courthouse to enlist.

Sadly, James died of consumption at Fort Curtis in Helena, Arkansas, just six weeks into his service. His wife’s former owners assisted her in applying for his pension and four years later, she was finally awarded it. Nine years later, she purchased a lot, becoming one of the first women of color to own property in the city of Cape Girardeau.

In June 2017, the Cape Girardeau City Council voted to name the area on the courthouse lawn where James enlisted as Ivers Square in honor of James and Harriet Ivers.

Two years after the naming of Ivers Square and 156 years to the month after James Ivers enlisted, a statue was placed on Ivers Square in June 2019, to honor the courage and sacrifice of these soldiers.

A little more about the statue itself – yes, there’s a great story here too! The first two casts of this statue are located at the Nashville National Cemetery and at Freedom Park in Helena, Arkansas. There is a limited number of times that a statue can be created from the original mold and we have the final cast of this statue right here at Ivers Square.

The monument is registered in the Inventories of American Painting and Sculpture, Smithsonian Art Museum. In addition to being an important part of history, it’s also a stunning work of art.

The Bank of Missouri is proud to be a sponsor of this statue. What started with one curious individual, lead to more people, organizations, and business coming together around this project. And that lead to history that was lost for over 150 years, now standing for future generations to remember. This is a story of how one person can make a difference and it’s a story of community collaboration, service, history and art.

And, that’s why we’re grateful for the part we’ve been able to play in bringing this statue to Southeast Missouri. We’re also grateful to Denise Lincoln, the committee who raised funds for this project, Old Town Cape, and the additional sponsors who made this possible.

Stop by anytime to see the statue at Ivers Square. It’s worth the trip!

And, last but not least, never underestimate the power of one person to make a difference.

“One relationship at a time” is a phrase heard often at The Bank of Missouri. That’s because the Bank was founded on the principles of relationship-building 130 years ago. Through relationships, we empower our community with the resources they need to thrive.

Leaving The Bank of Missouri

External third-party websites will be presented in a new and separate content window. The Bank of Missouri does not provide, and is not responsible for, the product, service, overall website content, availability, accessibility, security, or privacy policies on any external third-party sites. We encourage you to review their privacy and security policies which may differ from The Bank of Missouri. The inclusion of any hyperlink does not imply any endorsement, investigation, verification or monitoring by The Bank of Missouri of any information in any hyperlinked site.